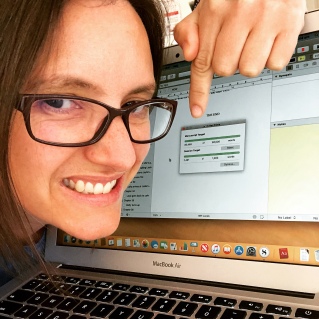 On 13 September, I started writing a new book with a loose plot outline and no idea how I was going to get there. Seven weeks and three days later, I finished the first draft.

I’ve never written something so fast. It poured out of me in a great, dizzying gasp. I wrote as if I were possessed, my brain firing ideas, SNAP, SNAP, SNAP, so fast my fingers could barely keep up. Subplots developed almost of their own accord; my main character went in directions I hadn’t expected when I started. I didn’t edit as I went. I thought about it day and night. Possibly (probably) neglected my children. Crammed multiple writing sessions into every day. Almost missed my bus stop several times.

I had the idea for this book several years ago – had even written a few thousand words – but the themes in the story only crystallised a few months ago when I pitched the idea to my editor. It was then that I realised the kind of book I wanted to write, and I started getting excited about it.

Of course, now it’s written, I need to go back and fill in the unexpected subplots that cropped up halfway through. It is likely a great pile of word vomit, as first drafts tend to be. Half the characters’ names are still xx. The town in which it’s set, almost a character itself, is still called xx. I need to unpick rambling, repetitive descriptions and gestures, tone down the emotion in some places, ramp it up in others. I need to do the tedious research that gives a story its colour and authenticity.

Now it’s finished, I miss it. I’m itching to go back in and start editing, but I also know I need to take a mental break from it, not only to let it settle in my brain, but to recover from the experience of writing it.

The story engages with a lot of stuff that makes me very angry. I vibrated with rage as I wrote. Now it lives outside my brain I feel exhausted and empty, and I’m left with this dark, twisted, ugly little thing that I have to try to pull back towards the light without losing that rawness.

But one of the joys of writing is the unexpected moments of hope and brightness that push their way through. One of the themes that came through all on its own – and turned out to be one of the main foundations of the story – is the beauty and complexity of friendship between women.

I also believe in my vision for this story. If I can pull it off, I think it will be better than the last thing I wrote, and the one before, and I can’t ask for any more than that.

So I’m trying to be content with taking a break (with limited success). I’m reading a lot, and I’m planning to finally start riding my horse again. And one day soon, I’m going to print out the manuscript and read through it to work out what to do with it.