Pedro is the most recent addition to our animal family and has proven no exception to the personality rule. We found him at the Animal Welfare League as a three month old kitten, terrorising his brother in the cage they shared. I must admit that being black was the first thing that attracted us to him – it wasn’t a pre-requisite, but it just seemed nice and neat to have three black animals in the family – and that’s what got us in the cage with him.

He and his brother were both black with white chests and paws and were exceedingly handsome. The brother perhaps more so – his markings were perfectly symmetrical, whereas Pedro had a curly white moustache on one side of his face and nothing on the other. But when we reached out to touch the brother, he shrank away from us in fright. Pedro, on the other hand, pushed into our hands and purred like a little chainsaw in between tumbling around on the floor and trying to engage his brother in play. Plus, his Mexican moustachio was just irresistable, so he came home with us.

All the way home, he kept sticking a little white paw out of the hole in the box, trying to get out and start causing havoc as soon as possible. Far from being afraid of the other animals, he was already hissing at Jedi through the hole before we’d even opened the box. It took a total of about 10 minutes before he got over the last of his hesitation and was weaving around Jedi’s legs and walking under his belly. 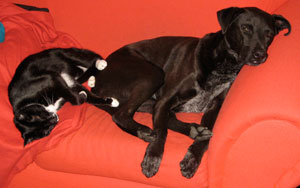 Pedro settled into our family in record time. Right from the start, he flatly refused to sleep anywhere but on our bed, preferably on our feet or in between our legs – whatever is the most irritating. He was bossing Wednesday around even before he’d exceeded her in height and weight. But his true love from day one has been Jedi. He idolises that dog and is always following him around – rolling on his back and reaching out for his legs when he walks past, walking back and forth under his chin when he’s lying down, rubbing his face against him. Every night when we get home the two of them sprint up and down the hallway, taking it in turns chasing each other, Ped doing rather spectacular burn-outs around the corners.

I’ve never known another cat with Ped’s voracious hunger. No matter how strictly we stick to the 7am breakfast and 6pm dinner ritual, he always starts campaigning loudly an hour beforehand. He yells constantly when he wants food – even if we spray him with the water thing to try to deter him, he just frowns and blinks at us and keeps yelling.

He has a love for toast, and sits beside Jedi every morning waiting to get a corner of my toast, which he chews up with as much enthusiasm as if I’d just handed him a chunk of meat. But what he really loves is bacon. As soon as the bacon comes out of the freezer, he’s at our feet, yelling for it. He watches the microwave defrosting it like it’s TV, and while we’re chopping it, he’s trying to climb onto the bench and swiping at it with a paw. In his most death-defying stunt, he leaps up towards the bacon and clonks Jedi under the chin with his head. The most patient dog in the world would be sorely tried by such an incident, but Jedi, bless him, only ever takes a step back, or walks around to the other side of whomever is chopping to maintain his view. A lesser cat would have lost his head by now, but Ped remains unpeturbed.

He has a voice exactly like a psychotic version of Dicky Knee, and his vocabulary is littered with four letter words that cannot be repeated here (and which he will probably have to abandon once there’s an impressionable young human in the house).

Most cats I’ve had have been generally tolerant of but not overly enamoured with people. Ped is an exception to this rule. He loves hanging out with us outside, whether he’s sitting on our laps in the sun, walking around talking to himself or trying to race Jedi. If he finds himself shut outside without us, he’ll wail incessantly at the door until we let him in.

Ped is a complete dag. When it’s hot, he sleeps on his back with his belly exposed and his body twisted. Also rare in a cat, he enjoys a belly rub and never attacks us. And speaking of his belly, it was only after we’d got him home that we discovered his coolest marking – a perfectly symmetrical white patch on his belly shaped exactly like a bat.

Pedro is the kind of cat I’ve always wanted – acts a lot like a dog, likes people, but still has that special cat attitude that lets you know exactly where you stand in the world – as a somewhat irritating, occasionally useful servant with a warm lap.